Autumn is coming! And considering the super hot summer we've had here in northern Italy, I think it is the first time I am actually this glad that Fall is just around the corner.

I'm definitely ready for cool air and in the mood for cozy, comforting days at home.

And speaking of cozy and comforting, I'm back with a very special sweet recipe for you: gluten free vegan apple cinnamon rolls!

Oh my, are these GOOD.

They're filled with a super simple apple cinnamon compote, which makes them softer and so much tastier.

We've been having these gluten free cinnamon rolls for breakfast, as dessert and mid afternoon too.

What's very important is that you serve/eat them warm. If you're not serving them right out of the oven, re-heat them a couple minutes before having them and don't hesitate to drop a spoonful of vanilla ice-cream on top!

So, if you're ready for all the Fall vibes, keep scrolling for the recipe and enjoy! 😉

P.S. More apple filled goodies? Check out these baked donuts and my strudel with homemade shortcrust 😉 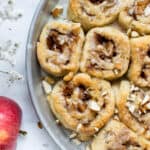 For the apple compote

Hi! So grateful you're here! I'm Sonia, welcome to my little Italian corner of the world where I share comforting recipes without gluten and mostly vegan, to help you enjoy a much easier and definitely tastier allergen-free life!