After being a bit MIA lately, here I am again with a savory recipe and since a rustic pie with homemade gluten free crust had been on my to-do list for a loooooong time, I thought that autumn was just the right time to experiment with it, as the weather gets colder and it calls for comforting, hearty food.

For the pie crust, I opted for wholemeal brown millet flour, which I've already experimented with and I especially love in savory baked recipes, as it has a nice rustic taste. Also, millet flour is rich in minerals and antioxidants, so it's a more healthy and nutritious gluten free alternative to the usual rice flour, for instance.

I love the veggies in season now. I've never been much of a pumpkin fan until a couple years ago, now I basically NEED to have at least one slice of pumpkin in my fridge all the time, to cook with pasta, soups and now pies too, that is.
And so I decided to go with it, add some sliced portobello mushrooms and red onion, sautee them a few minutes and add the mix on top of the creamy filling, which I've made using my easy go-to cashew sauce, but you can substitute it with a plant-based "cream cheese" as well.

I came up with this recipe also thinking about the upcoming holidays and hoping to help all the food-sensitive people out there, like my sweetheart and I, to have a tasty, comforting dish during the holidays gatherings 🙂

So let me know if you give this veggie pie a try and what you think of it! 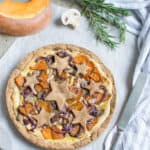 Hi! So grateful you're here! I'm Sonia, welcome to my little Italian corner of the world where I share comforting recipes without gluten and mostly vegan, to help you enjoy a much easier and definitely tastier allergen-free life!